Cloud Adoption: Change Their Behavior or Change Your Mind

Change begins with planning and processes, but it starts with people. Colin Sloman explores what will be needed for people to adapt to and adopt the migration to cloud technology.

In 1789, Benjamin Franklin wrote that "… in this world, nothing is certain except death and taxes." Now, I'm not blaming him for failing to predict the advent of cloud computing, but the fact remains that the internet is awash with historic statistics and forecasts of cloud adoption rates that are, frankly, so high that they might give even Mr Franklin pause for thought, were he still alive today.

Take respected analysts, Gartner, for example, who last year forecast that by 2025, 95% of new digital workloads will be deployed on cloud-native platforms – up from 30% in 2021.  Even technologically conservative industries such as banking are being swept up in the storm, with a recent forecast predicting that 87% of the banking industry will migrate its IT services to the cloud by 2032.

This begs the question: With such profound transition and transformation, what is required for success? In my experience, people often know what needs to be done, but it's the actual doing that presents the greatest obstacle.

There are, perhaps, some lessons to be learned from history in the evolution of technologies and ways of working. In the past, mainframes became networked, client servers became desktops, and now cloud services present the next evolution in computing technology.  Similarly, the first generation of the internet was about connectivity, the second about collaboration, and now we're entering a third generation that is transforming the way we work.

Although accelerating digital transformation is becoming critical in today's marketplace, technology adoption has not been met with the same gusto. Industries that are slow to adapt face critical business failures and the same decay that comes with legacy systems and outdated ways of working. They're hunkered down, tethered to their existing infrastructures and their established, tried-and-true ways of doing things.

In many cases, large companies have been slow to embrace change for this reason, even though they aspire to change. The migration to cloud-based services and infrastructure is a case in point. Generally speaking, the benefits are well-noted, and the concerns and drawbacks are manageable. Consider, for example, our daily interactions with the ubiquitous cloud-based SaaS platforms out there – social media sites, Gmail, Netflix, Spotify, and others. Their rapid adoption and the speed and scale with which they have been delivered is, frankly, nothing short of breathtaking. The conclusion I draw from this, though, is that faced with migrating to the cloud, the biggest hindrance is not the pros and cons list, but rather, is in the hearts and minds of the people asked to change the way they do things.

In the 1980s, when typists moved from typewriters to word processors, the design of computer keyboards aimed to provide them with greater satisfaction, accuracy, and comfort.  But there were drawbacks. The Shift and Enter keys were too small, and an add-on, known as a keytop expander, was sold to solve where the product missed the mark. The result is the expanded Shift and Enter keys we use on modern computers today. The lesson? The way that users adapt to change decides whether adoption becomes embedded. In other words, people drive change.

The biggest challenge of adapting to change is not in the drawbacks of the product you're switching from and to. It is whether the people in your organization understand and support the change. Cognician CEO and co-founder, Patrick Kayton, recently wrote about Cognician's eight activation catalysts – a behavioral change methodology we use to activate and accelerate change. If you consider applying our eight activation catalysts to help speed up your change adoption, you have a recipe for success.

For example, take the subject of finding meaning in your change work. If you want your people to get behind a change they find meaningful, you need to provide them with a clear understanding of how it will benefit them as individuals and as an organization. This is what we mean when discussing having a sense of purpose or meaning.

Cloud adoption can reduce costs and increase speed and efficiency while enabling scalability, flexibility, and enhanced collaboration. But its benefits are only realized when people individually and collectively support the change. And this is where our eight catalysts for activation can help to activate employee buy-in and adoption. By injecting meaning into your change initiatives, employees are activated to support it. And by contributing to the change with reflection and insight, they are motivated to focus on connections, commitment, and most importantly, inspired to take action. You can explore all of our activation catalysts and tactics here.

A great example of activation at work can be found in a recent Cognician engagement in which we helped a large organization that was struggling with adoption of their cloud-based software midway through rollout. Employees would be required to interact with this software 90% of the time, so it was imperative that they embraced the change. After diagnosing inefficiencies rooted in their current workforce management solution, we helped to increase adoption of the new software by 32% in just 15 days. By creating an activation program containing fun and informative daily challenges, we helped over 2,500 employees to successfully navigate and engage with the features of the new software.

So, what do companies need to achieve their change agendas? To my mind, it's the same thing that the typists needed – the same thing that people always need. They need the chance to share their ideas, overcome their fears, and adopt the new way their way – with support from you at every step on their journey.

At Cognician, we've synthesized the most impactful tactics we've used to activate behaviors and categorized them into eight catalysts for activation. These catalysts are design principles for activation, and we've found them to have a tremendous impact on the hearts, minds, and actions of people.

To find out more about the eight catalysts for activation and how they can help you achieve behavior change in your organization, follow this link: https://info.cognician.com/blog/change-hearts-minds-and-actions-through-activation-heres-how

​​Delivering Transformative Change – Engaging One Mind at a Time 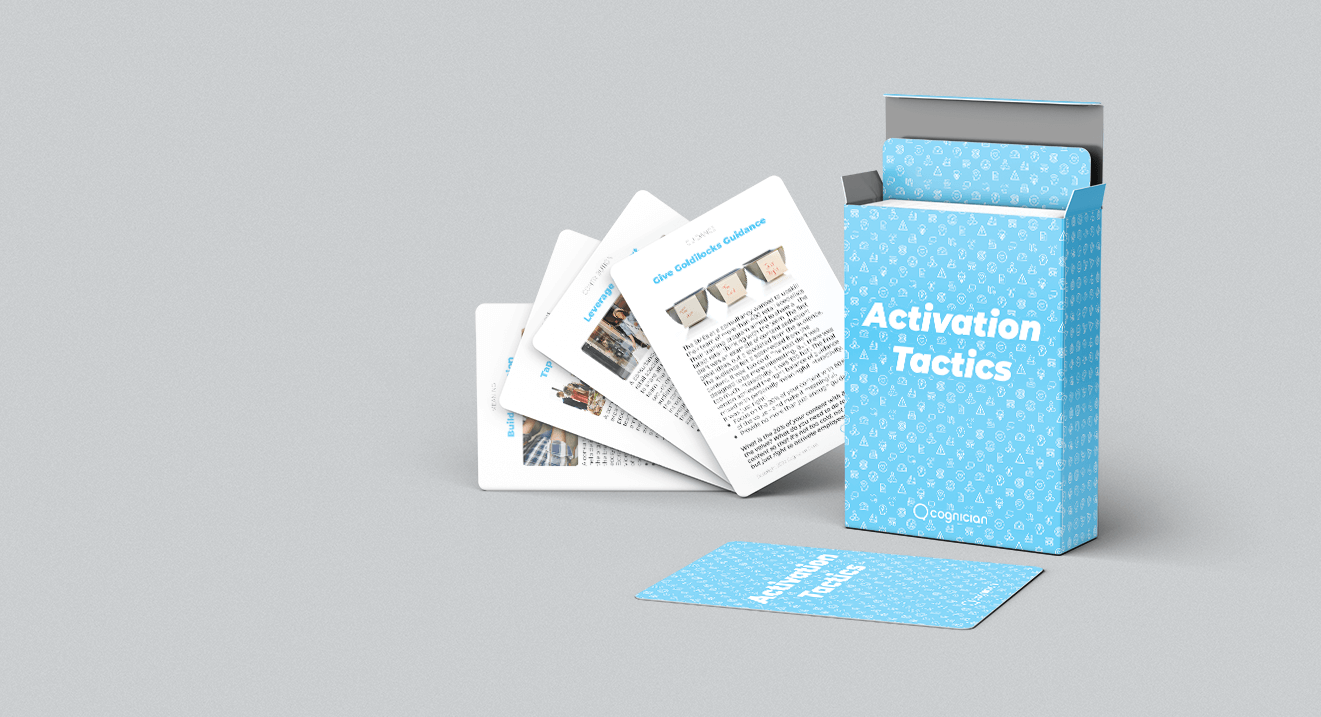 Change Hearts, Minds, and Actions Through Activation. Here's How:

Cognician co-founder Patrick Kayton discusses our unique approach to behavior change. And how it can improve your change...

Hybrid Workplace Success Relies on Leaders. What Can We Do to Make Sure They Succeed?

Hybrid working is the future. It's crucial to equip leaders to get it right. Colin Sloman discusses how Cognician can help.